The world of Presidential politics is a wild place.  Campaigns are occasionally filled with debates about policy issues.  However, they are mostly dominated by mudslinging, candidate personalities, and fundraising, while actual policy seems like an afterthought.  What ties all of these components together to make a campaign successful is a slogan that connects with voters.  Conversely, an uninspiring or cringe-inducing campaign slogan will either doom, or at least not revive an ailing campaign.  Examples of such slogans abound not just in the modern day, but throughout American history.

In the 1936 Presidential election, Kansas Governor Alf Landon was the nominee for the Republican Party.  He was trying to prevent incumbent Franklin Delano Roosevelt from being reelected President of the United States.  Pre-election polling from the Literary Digest even suggested that Landon would win the election in a landslide.  Accordingly, his campaign unveiled the slogan, “Let’s make it a Landon-slide.”  However, the election ended with a landslide defeat for Alf Landon: He only won the states of Vermont and Maine, totaling 8 electoral votes, and 36.5% of the popular vote.  Roosevelt, on the other hand, won 60.8% of the popular vote and 523 electoral votes. 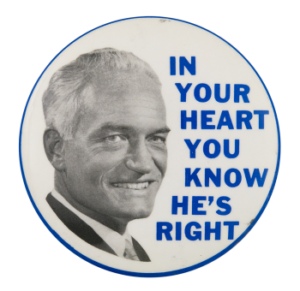 Barry Goldwater was a conservative firebrand Senator from Arizona and the Republican Presidential nominee in the 1964 election.  He ran against incumbent President Lyndon B. Johnson, who assumed office the previous year following the assassination of President Kennedy.  During his acceptance speech at the Republican National Convention, Goldwater infamously remarked, “Extremism in defense of liberty is no vice.  Moderation in pursuit of justice is no virtue.”  He tried to alleviate his perceived extremism in the eyes of the American voter by means of his campaign slogan, “In your heart you know he’s right.”  However, this slogan fell on deaf ears.  In fact, the Johnson campaign parodied this slogan with “In your guts you know he’s nuts.”  The election ended up being a disaster for Goldwater.  He lost the popular vote 61.1%-38.5% and the electoral college 486-52, winning only the states of South Carolina, Georgia, Alabama, Mississippi, Louisiana, and his home state of Arizona. 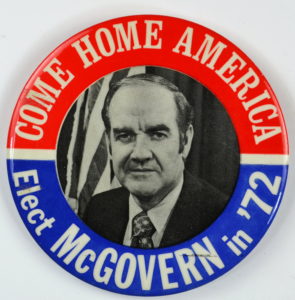 George McGovern was a Democratic representative and Senator from South Dakota who won his party’s nomination for the 1972 Presidential election.  He ran against incumbent President Richard Nixon, who was the overwhelming favorite to win throughout the entire electoral process.  Nevertheless, McGovern attempted to win America over to his side with the cliché slogan, “Come home, America.”  Americans did not take his advice and instead re-elected Nixon in a landslide.  More specifically, Nixon won with 60.7% of the popular vote and 520 electoral college votes in comparison to McGovern’s 37.5% of the popular vote and 17 electoral college votes.  These votes came from Massachusetts, which was not even his home state, and the District of Columbia. 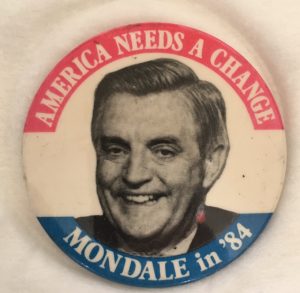 Walter Mondale was a former Senator from Minnesota and the Vice President of the United States for four years under President Carter.  He was the Democratic Party nominee for President against the popular incumbent Ronald Reagan, who presided over a booming economy.  Mondale infamously promised to raise taxes at his party’s nominating convention.  He ran on the generic, uninspiring campaign slogans, “For New Leadership,” as well as “America Needs New Leadership.”  On election day, the vast majority of Americans disagreed with Mondale.  Reagan was re-elected with 58.8% of the popular vote and 525 electoral votes, which is the highest number of electoral college votes a candidate has received to this day.  Walter Mondale only won his home state Minnesota and the District of Columbia, which added up to a mere 13 electoral votes.

More recently, there have been several candidates that have failed to perform well in their own party’s presidential primaries.  Their uninspiring and often strange campaign slogans certainly did not boost their respective candidacies. 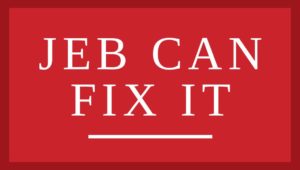 Jeb Bush ran to be the nominee for the Republican Party in the 2016 election.  He was the former Governor of the all-important swing state of Florida, and the son and brother, respectively, of the past two Republican presidents.  He entered the race in June 2015 as the favorite to win the nomination.  However, his chances quickly plummeted after a constant barrage of attacks from then-candidate Donald Trump.  In November of that year, he tried to reboot his campaign with the low-energy slogan, “Jeb can fix it.”  However, this did nothing to reverse his fortunes.  He ended up winning only 2.8% in the Iowa Caucus, coming in sixth place.  Also, he managed to win 11% of the vote in the New Hampshire primary, but still came in fourth.  After his distant fourth place finish in South Carolina at 7.8%, Jeb Bush withdrew from the race, and in effect, from the political scene. 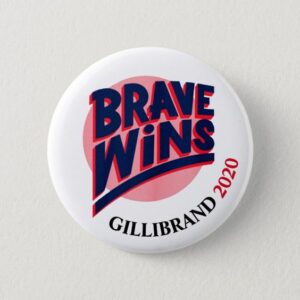 Kirsten Gillibrand is the Junior Senator from New York.  She replaced Hillary Clinton in the Senate when she became Secretary of State.  She briefly ran to be the Democratic nominee for President for several months in 2019.  Her campaign slogan was “Brave wins.”  This odd slogan did not gain her any traction in the race.  Although she participated in the first two primary debates in June and July respectively, she was unable to qualify for the August debate.  She dropped out on August 28, 2019, months before the Iowa caucus.

Bill Weld is the former Governor of Massachusetts and was Libertarian Gary Johnson’s running mate in the 2016 election cycle.  Nevertheless, he is a Republican that comes from the establishment, moderate wing of the party.  He is a vocal critic of President Trump, and he decided to challenge him in the 2020 Republican primary.  He ran on the slogan, “America has a choice.”  Americans, or at least the ones who voted in the Republican primary, made their choice definitively.  Weld has only received 2.42% of the vote and has won no primary contests.  On the other hand, Donald Trump has received 93.94% of the vote thus far, totaling 15,795,864 votes, the most for an Incumbent President in his party’s primary in U.S. history.  After Donald Trump secured enough delegates to be re-nominated on March 17, Weld dropped out the following day.

Campaigns are largely defined by their slogans.  An uninspiring or laughable slogan will doom a political campaign, as the previous examples attest to.  In order for campaigns to be successful, they must develop slogans that inspire a large segment of the American population.