8 Steps to Flipping Your Local Board 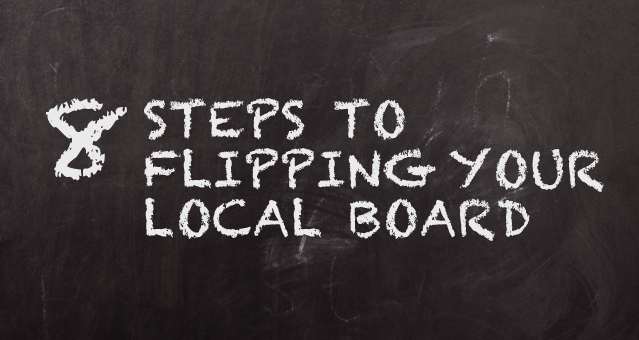 All county, village, or school boards have, at some time, made a decision that you and your neighbors knew harms your community instead of helping it.  Instead of backing down under popular pressure, the board dug in its heels.  The only way left to change the decision is to elect new board members.  The process of electing new people to flip the board certainly seems overwhelming to start and finish successfully — like trying to move into a new house when you forgot to label the boxes — but it can be done.  Here are eight tips to help get started.

First, move quickly while popular support is still behind you.  If, as either a candidate or activist, you wait to mobilize a campaign six months after the decision was made, the window of opportunity to get the most supporters because of your stance on the issue will close.  Also, moving quickly may catch your incumbent off guard, giving you an advantage.

Second, if you haven’t already, begin attending your local board meetings.  By going to the meetings, you will see what are the other current major issues in your community and see the political process for yourself.  You’ll also begin to build relationships with other members of the board.

Third, research what the board has done in the past so you are aware of its political history.  Knowing the board’s history has another benefit: it will help you identify the important issues and who the core groups are and what issues around which they usually coalesce.  For example in Menomonee Falls, WI, knowing the board’s history would reveal that they recently gave a permit to a questionable business.  Conservative challengers made this an issue in their campaigns which gave them enough support to defeat their more liberal incumbents.

Fourth, identify a core issue you support which can also be a central rallying point for a group of supporters.  You can’t win an election without supporters, and you can gain only a few voters based on personality, so you need a prominent issue or two that you can promote that will earn you support.  Also, creating a clear message for your campaign requires you to have a core issue.  If you talk about too many issues, your campaign will never achieve the clarity it needs to spread its message effectively and gain supporters.

Fifth, after identifying a core group of people, find candidates — perhaps yourself — who can run for office.  Consider whether the background and experience of the potential candidate will help distinguish him or her from other candidates.  The level of community involvement by your potential candidate is another factor to consider.  Make sure that the core issue people are rallying around is a winning issue for you or your candidate.

Seventh, develop a campaign team.  Recruit people with experience running for office in the past or worked in precincts.  For those less experienced, get them training so they learn about the process before they learn through sometimes costly trial and error.  Do not turn away help, and give recognition for jobs well down. Taking help for granted lowers morale and slows your campaign.

Eighth, commit for the long term.  Winning doesn’t always happen in one election.  It may take multiple election cycles to flip a board.  The Kenosha, WI, school board is one such example.  A conservative upsurge happened in 2010-11, but the school board was not flipped until this spring.  Fighting for conservative values is like a marathon, not a sprint.

Flipping a board is more doable than you might think.  These are just a few broad recommended steps to help you get started.  If you would like more detailed information about each step, you can read American Majority’s training manuals online, attend a seminar or contact us to set up a personal consultation.

Blog
Your Campaign Website: Is it Helping or Hindering You?
Blog
Do you know how to tell your story?