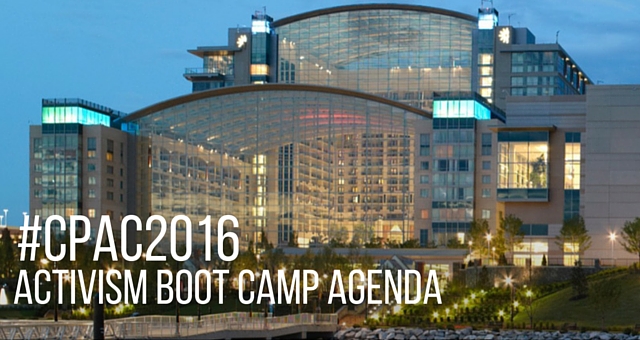 We are pleased to release the final agenda for the CPAC 2016 Activism Boot Camp, running Wednesday, March 2 – Friday, March 4, during the Conservative Political Action Conference in National Harbor, MD.

The CPAC Activism Boot Camp is set to unveil the best-kept winning campaign secrets on both sides of the aisle. Last year almost 1,000 people in standing-room only crowds were trained to win. The serious activists caught the attention of dozens of mainstream media outlets that led with headlines like, “How Conservatives Are Readying Their ‘Grassroots Army’ For 2016” (NPR), “Conservatives Aim to take Campaign Tips from Obama Playbook” (TIME), and “CPAC Campaign Boot Camp Trains GOP to Catch Up” (Roll Call).

On Wednesday, attend one of three tailored tracks—Student Activism, Community Activism, and Campaign, Data and Tech—as well as top-notch training sessions on Thursday and Friday. This training will be conducted by 30+ activists and campaign professionals who are out in the field making a difference today, including American Majority trainers from across the U.S.

3:15 pm There’s No Such Thing as a Safe Space: Keeping Campuses Free: Catherine Sevcenko, Foundation for Individual Rights in Education

1:00 pm Community Organizing in a Post-Obama World: Matt Robbins, American Majority 1:45 pm How to Beat the Left at Their Own Game: Brent Gardner, Americans for Prosperity 2:30 pm The Latino Vote: The Beginning or the End of the Conservative Movement?: Mike Madrid, GrassrootsLab 3:15 pm Social Media: How to Become the Digital Activist Every Movement Needs: Aubrey Blankenship, American Majority 4:00 pm The Wisconsin Model: A Five-Year Fight: Matt Batzel, American Majority 4:45 pm Not Running? What YOU Can Do to Influence an Election: Chris Doss, Revolutionary Communications 5:30 pm Adjourn followed by Activism Boot Camp Reception, open to all Activism Boot Camp attendees

1:00 pm Campaign Messaging: How to Come Across in a Me-First World: Jessie Nicholson, Wisconsin Women’s Council Board Member

2:30 pm  What Is Political Database Technology and How Will It Help?: Chris Littleton, Voter Gravity

3:15 pm Social Media, SEO, and Campaign Branding: Use It or Lose It: Austin James, SOLVE

4:00 pm Say Goodbye to Clipboards: How to Run a Campaign from Your Smartphone: Ned Ryun, American Majority

10:00 am Bridging the Divide Between Veterans and Politics: Seth Lynn, Veterans Campaign

10:30am Talking to Minority Voters: Making the Case for Conservatives Nationally: Mike Madrid, GrassrootsLab 11:00 am If Reagan Ran Today: What 2016 Activists Must Learn from Reagan’s Leadership Style: Peggy Grande, The Quiggle Group 11:30 am The Best Campaigns of Last Cycle and What You Can Learn from Them: Tayt Brooks, American Majority 1:00 pm Become the Press: Oliver Darcy, The Blaze

10:00 am Conservative Talk Radio: Rational Thought and the Average Joe: Andrew Wilkow, Host of the Wilkow Majority on SiriusXM Patriot

11:00 am How to Get-Out-the-Vote with Digital: Kurt Bardella, 0ptimus / Endeavor Strategies

11:30 am You Get What You Measure: 10 Ways to Evaluate Your Lawmaker: Jessica Anderson, Heritage Action