Grassroots activists have been protesting for several weeks to reopen the Wisconsin economy. Last week, the Wisconsin Supreme Court ruled that the statewide Safer at Home order was “unlawful, invalid, and unenforceable.” In the absence of a statewide lockdown, Wisconsin local governments rushed to enact their own lockdowns that similarly trampled on the constitutional rights of citizens. The Wisconsin grassroots pushed back on local tyrants and Wisconsin is opening up more and more each day. The past week has been a testament to the dedication of grassroots conservatives to defend their constitutional rights.

On March 24, Wisconsin issued a statewide lockdown, called a Safer at Home order, in response to COVID-19. The goal was to keep “our health care workers in communities, safe.” Penalties for not complying with the order include a $250 fine or up to 30 days in jail. The original order was extended a few times, most controversially on April 16, when it was extended to May 26.

In response, the Wisconsin state legislature sued the Executive Branch regarding the legality of issuing such a restrictive executive order. On May 6, the Wisconsin Supreme Court held a hearing on the lawsuit. During the hearing, Justice Rebecca Bradley strongly questioned how an unelected bureaucrat could have the power to shut all businesses and keep everyone home.

“Where in the Constitution did the people of Wisconsin confer authority on a single, un-elected cabinet secretary to compel almost 6 mil people to stay at home, close their businesses & face imprisonment if they don’t comply… Isn’t it the very definition of tyranny?”

"Where in the Constitution did the people of Wisconsin confer authority on a single, un-elected cabinet secretary to compel almost 6 mil people to stay at home, close their businesses & face imprisonment if they don’t comply…
Isn’t it the very definition of tyranny?" #wiright pic.twitter.com/hc39VWqPuh

Over the past several weeks, a grassroots movement began to demand the state reopen. Thousands of protesters gathered at the State Capitol in Madison. Driving protests popped up in many places, and many business owners and citizens voiced their opposition to such a long, drawn out lockdown.

Last week, the Wisconsin Supreme Court ruled that the government exceeded their authority with Executive Order 28. The Majority opinion held that the “order confining all people to their homes, forbidding travel and closing businesses exceeded the statutory authority.” The ruling also made clear that Wisconsin laws only permit government officials “authority to quarantine those infected or suspected of being infected.” 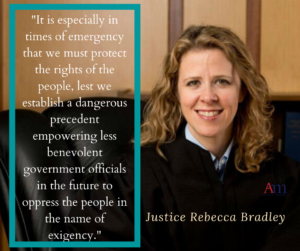 Wisconsin Supreme Court Justice Rebecca Bradley’s concurring opinion made the case that our constitutional rights must always be protected, especially in an emergency.

So local government officials, some elected and many unelected, sought to do the exact same thing the state had done with a Safer at Home Order, ignoring the Wisconsin Supreme Court’s ruling.

The grassroots fought back to stand up for their rights. American Majority brought a Friday afternoon webinar: How to Fight Government Overreach in Wisconsin. You can watch that recording HERE. Several webinar attendees did exactly that and helped their communities to reopen.

Many localities quickly realized they had no authority to issue a similar Safer at Home order, like Sheboygan County, and announced they would not create new local orders. But several local governments did local extensions of basically the same exact statewide unlawful order. When local officials heard the outcry from their constituents and looked more closely at the state ruling, counties like Brown and Outagamie ultimately rescinded their lockdown orders. Some Wisconsin state officials even encouraged the local abuses of power. While a few local orders still remain, lawsuits are being prepared to challenge their authority.

The Reopen Wisconsin grassroots were the victors in all of this as they fought for freedom. It is amazing how many bureaucrats at the state and local level revealed their true colors that they want to usurp as much power as possible. The people of Wisconsin had enough and stood strong for their constitutional rights. But what’s next? If local elected officials were so willing to trample constitutional rights, the people can and should replace them. 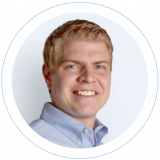 Matt joined American Majority in October 2010 to open their Wisconsin office. Prior to joining American Majority, Matt gained experience at the state and federal levels, including in all three branches of the federal government. He has a tax law background, having practiced in the private sector for over two years following his graduation from law school. Matt currently resides with his wife and three children in Oostburg, WI.
X