Join, or Die: The Meme that United America 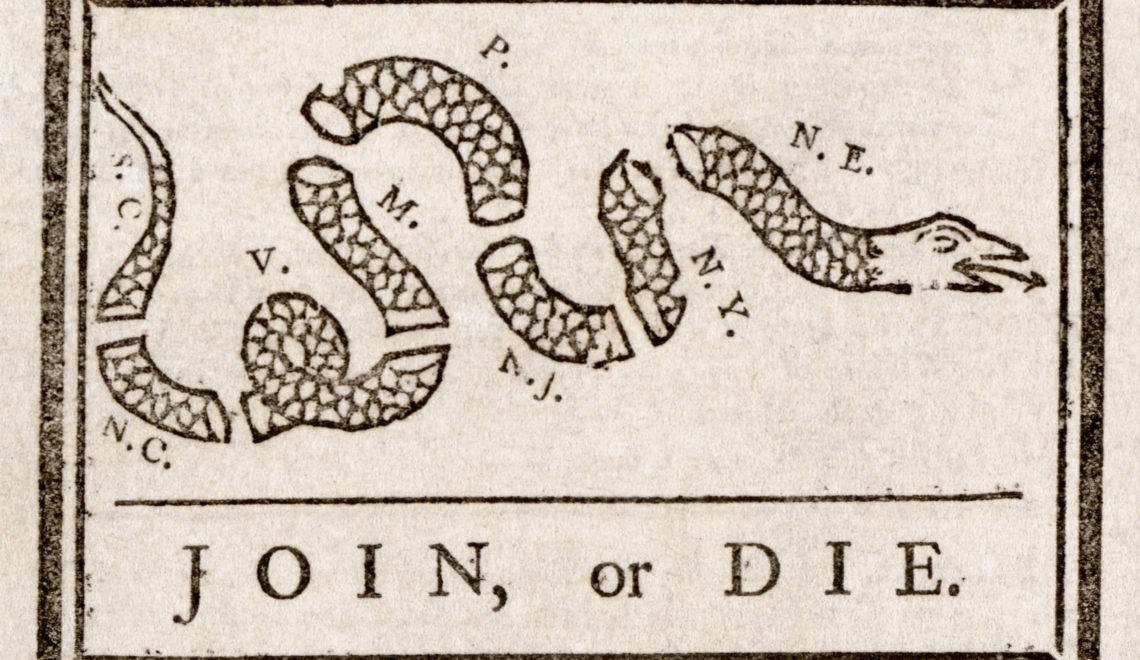 Probably the best known meme from American history was the “Join, or Die” political cartoon, published on this day on May 9, 1754. The engraving serves as a reminder that we are stronger together than we are apart. It is also one of the first, and most effective, examples of political cartoons that continues to be employed on a regular basis today.

Contrary to popular belief, Benjamin Franklin’s political cartoon was not created to unify the colonies against the British, but rather was made in an attempt to win the war effort against the French and Indians. The image and its message were so successful in their goal during that war, that it was resurrected during the American Revolution.

Today the image is printed on everything from bumper stickers to flags. I think the reason why is because it is a visual reminder of where our nation has come from and the power that we have as a united nation rather than a fractured conglomeration of state factions.

What can we learn from “Join, or Die?”

The engraving harkens back to an era, much like today, when the states and the people within them were focused more on what divided them rather than their common interests and it serves as a reminder of the power of unity despite those differences.

The colonies were very dissimilar from their journey to colonization to the people who called them home. As such, they were reluctant to join together first as a fighting force against the French and later as a nation because of these unique interests that they thought were better served as individual states.

The engraving also highlights the power of media in times of trouble – of our need for information and encouragement in dark times. As we surpass a month that many people have spent in government mandated social distancing, and often isolation within one’s home, there is no argument that we find ourselves in untested waters.

We ought to remember the power our words and even images such as this one have on the psyche of those that view them and seek to inform and uplift those that view our posts.

That should always be your goal, whether you are an activist, an organization leader, a political candidate, officeholder, or a political enthusiast, but especially now.

Our communities want, and dare I say need leaders to step up to the plate and unite us under a common interest. For the colonists in 1754, that common interest was defeating the united French and Indian forces. What will it be today that brings us back together again?