There have been many Presidential candidates throughout American history whose great enthusiasm among the general population was instrumental in securing the Oval Office.  An uninspiring or cringe-inducing campaign slogan, such as the ones explored in my previous blog post, can often sink a campaign.  However, the key element to a successful Presidential campaign is a slogan that connects with the American voter. 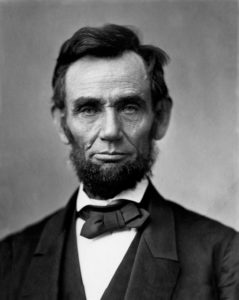 Abraham Lincoln, 1864 | Don’t Change Horses in the Middle of a Stream

In the 1864 election, incumbent Republican President Abraham Lincoln was running against Democrat George McClellan, who was a former General in the Union Army before Lincoln relieved him of his command.  The nation was in the midst of the Civil War, the bloodiest war in American history, during this election cycle.  As Americans became weary of the war as time progressed, many people, including Lincoln himself, were convinced that his reelection was unlikely.  However, only two months before the election, the Union army captured Atlanta and they achieved a major victory in the Shenandoah Valley.  These successes convinced Americans that the war would soon be over.  Accordingly, Lincoln adopted the slogan, “Don’t change horses in the middle of a stream,” which FDR also used when running for reelection during World War II in 1944.  On November 8, 1864, Lincoln defeated McClellan by a 212 to 21 vote margin in the Electoral College, winning every state left in the Union except for Kentucky, Delaware, and New Jersey. 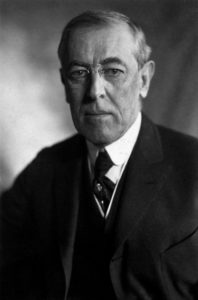 Democrat Woodrow Wilson was up for reelection in the 1916 Presidential election.  Wilson’s victory in 1912 was an electoral college mandate, largely due to Republican William Howard Taft and Progressive Teddy Roosevelt splitting the Republican vote.  However, Wilson faced tougher competition from Supreme Court justice Charles Evans Hughes in 1916, who had the support of a unified Republican party.  During this election cycle, Americans were bombarded with news reports concerning the ongoing First World War that was occurring in Europe.  Nevertheless, the sentiments of most Americans remained isolationist in nature.  Capitalizing on this widespread feeling, Wilson ran on the slogan, “He has kept us out of war.”  Although the United States would enter the war the following spring, such a strategy paid off for Wilson at the time.  He defeated Hughes by a 277 to 254 Electoral College vote victory, carrying states mostly in the South, Great Plains, and West Coast, while Hughes largely won Midwestern and Northeastern states. 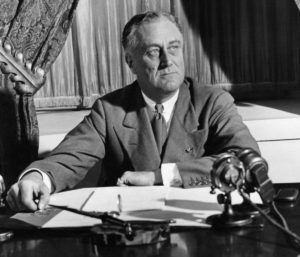 Republican Herbert Hoover was elected in a landslide in the 1928 Presidential election.  His overwhelming victory represented the pinnacle of Republican electoral strength in the 1920s.  However, this strength soon unraveled as the United States plunged into the Great Depression.  As the economic downturn worsened, so did Hoover’s popularity with the American public.  Such a tumultuous landscape provided an opening for the charismatic Democrat Franklin Delano Roosevelt.  He had served as the Assistant Secretary of the Navy under President Wilson, was James M. Cox’s running mate in the 1920 Presidential election, and was the Governor of New York prior to the 1932 Presidential election.  At the 1932 Democratic convention, the band was initially playing “Anchors Away” to commemorate Roosevelt’s service in the Wilson Administration.  However, Roosevelt’s advisors switched to the popular song, “Happy Days Are Here Again.”  The Roosevelt campaign swiftly adopted this title as its campaign slogan.  On election day, Roosevelt defeated Hoover in a landslide, winning 472 votes in the Electoral College to Hoover’s 59, with Hoover only winning Delaware, Pennsylvania, Connecticut, Vermont, New Hampshire, and Maine.  This election brought about an end to the Fourth Party System, which had dominated since 1896, and ushered in the New Deal Coalition, which largely remained intact until the 1980 election. 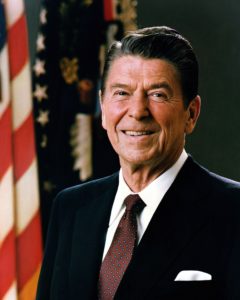 Ronald Reagan | Are You Better Off Now Than You Were Four Years Ago?

In 1980, Democratic President Jimmy Carter squared off against Republican Ronald Reagan, a former actor and two-term Governor of California.  Carter faced numerous obstacles on the path to reelection: the ongoing hostage crisis in Iran, high unemployment and inflation, low consumer confidence in the economy, the USSR invasion of Afghanistan, and America’s declining influence on the world stage.  Reagan was also an inspiring, charismatic candidate.  Nevertheless, Carter’s incumbency provided him with an advantage over Reagan for much of the race.  In a January 1980 ABC News/Harris survey, Carter led Reagan by a margin of 59% to 36%.  However, as the election neared, polling tightened to a virtual tie.  In the October 28, 1980 Presidential debate, the only debate of this election cycle, Ronald Reagan posed the following question to the audience: Are you better off than you were four years ago?  This question was adopted as one of the slogans for Ronald Reagan’s campaign coming down the homestretch of the campaign.  On election day, Reagan defeated Carter by 489 votes to 49 votes in the Electoral College, with Carter only winning Georgia, West Virginia, Minnesota, Maryland, Rhode Island, Hawaii, and Washington, D.C.  Like 1932, this election constituted a political realignment, only this time in favor of the Republican Party. 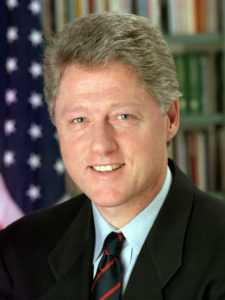 George H.W. Bush was Ronald Reagan’s Vice President for 8 years, and he was elected to the Presidency in his own right in 1988.  Bush presided over several profound accomplishments in foreign policy: the decisive victory against Saddam Hussein’s Iraqi forces invading Kuwait, the fall of the Berlin Wall in 1989, and the collapse of the Soviet Union in 1991.  However, Bush broke the promise he made at the 1988 Republican Convention to not raise taxes, faced a primary challenge from the paleoconservative Pat Buchanan, and faced Reform Party Candidate Ross Perot in the general election, who helped split the Republican vote.  Nevertheless, the greatest challenge to Bush’s reelection was the state of the economy, which had dipped into a recession.  Bush was also running against the young, charismatic Democratic Governor of Arkansas, Bill Clinton.  James Carville, the lead strategist for Clinton’s campaign, coined the phrase, “It’s the economy, stupid,” which became one of the unofficial slogans of the Clinton campaign.  The purpose of this slogan was to draw the attention of the American public to the poor state of the economy, which proved beneficial on election day for Clinton.  Bush was defeated by a 370 to 168 margin in the Electoral College in the 1992 Presidential Election.  Ross Perot received a record 19.74 million votes, but did not claim any electoral votes. 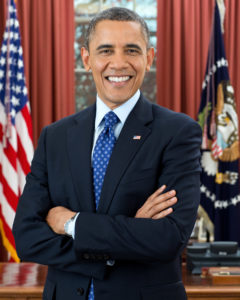 In 2008, Republican President George W. Bush was subjected to some of the worst Presidential approval ratings in the history of polling.  These dismal ratings were brought about by the ongoing and increasingly unpopular Iraq War, as well as the financial downturn that came to be known as the Great Recession.  Adding to the Republicans’ electoral trouble was the fact that John McCain was a septuagenarian, uninspiring candidate who was viewed as the face of a failed political establishment in the eyes of many Americans.  Also, his little-known running mate Sarah Palin proved to be no stranger to controversy.  On the other hand, Barack Obama was a young, charismatic Senator from Illinois who capitalized on the widespread desire for political change with his campaign slogan, “Change We Can Believe In.”  The public’s desire for change became apparent on election day, when Barack Obama defeated John McCain by a 365-173 margin in the Electoral College and a popular vote lead of nearly 10 million votes.  9 states and Nebraska’s 2nd Congressional District flipped into the Democratic column from just four years earlier: Nevada, Colorado, New Mexico, Iowa, Indiana, Ohio, North Carolina, Virginia, and Florida.  Winning more popular votes than any other candidate in U.S. history (69,456,897), Barack Obama became the first African-American elected President of the United States. 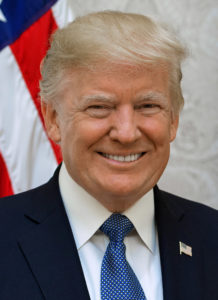 After 8 years in office, Obama’s charismatic charm had worn off on the American public, and his party had lost control of both the House of Representatives and the Senate, as well as numerous Governorships and State Legislatures.  Obama’s handpicked heir was former First Lady, New York Senator, and Secretary of State Hillary Clinton, who entered the race as the overwhelming favorite for both the Democratic nomination and the Presidency.  However, she was subjected to a tough nomination process against Bernie Sanders, a self-avowed Socialist Senator from Vermont, even though she eventually emerged victorious.  On the Republican side, 17 candidates ran for President, with most of them being current or former politicians.  With the Republican base equally angered at President Obama’s positions on Obamacare, the Iran Deal, and immigration, and the ineffectiveness of Republican politicians in stopping President Obama’s agenda on these issues, the time was ripe for a political outsider to take over the Republican party.  This outsider happened to be Donald J. Trump, who successfully took on seasoned politicians such as Marco Rubio, Ted Cruz, Jeb Bush, and John Kasich to become the 2016 Republican nominee.  The general election between Trump and Clinton was personal and confrontational, with Clinton’s email server and Trump’s personal life proving to be weak spots for the respective candidates.  Issues such as gun control, potential Supreme Court nominees, Islamic terrorism, and immigration policy dominated the ideological discussion.  Donald Trump famously pledged to build a wall along the southern border to stem the tide of illegal immigration and to have Mexico pay for the wall.  In an effort to condense his populist conservative platform into a coherent message, Trump used the slogan “Make America Great Again.”  This slogan was a 21st century adaptation of one of Ronald Reagan’s 1980 campaign slogans, “Let’s Make America Great Again.”  While this slogan motivated his base, Trump lagged Clinton in most public opinion polls for the duration of the race.  Even though the polls tightened in the final weeks of the campaign, major prognosticators considered Hillary Clinton the overwhelming favorite to win the election.  As an example, the Huffington Post said that Clinton had more than a 98% chance to win the election just several days beforehand.  However, her victory was not to be.  On November 8, 2016, Donald J. Trump defeated Hillary Clinton in the electoral college by a 306 to 232 margin, becoming the first person to be elected President without prior experience in public service.  He flipped the states of Florida, Iowa, Ohio, Wisconsin, Michigan, Pennsylvania, and Maine’s Second Congressional District from four years earlier.  Trump won the largest electoral college victory for a Republican since 1988, becoming the first Republican since 1988 to win Pennsylvania and Michigan, and the first Republican to win Wisconsin since 1984.  Although he lost the popular vote by 2.1%, he still managed to receive 62,980,160 votes, the most for any Republican nominee in U.S. history.